Ozarichi, 3 July 1997: reunion of former prisoners in front of the new memorial, which was erected in 1994

As the German Wehrmacht retreated in spring 1944, it forcibly evacuated tens of thousands of civilians and drove them forwards ahead of its units. At the beginning of March, the 9th Army of Army Group Centre under Supreme Commander Josef Harpe (1887–1968) set up three makeshift camps surrounded by barbed wire in a marshland area near the villages of Ozarichi, Dert and Podosinnik, southeast of Minsk. The stated aim was to get rid of “people with epidemic diseases, cripples, the elderly, women with more than two children under the age of ten, as well as others unfit for work”. Between 12 and 16 March the 35th Infantry Division under General Georg Richert (1890–1946) and Sonderkommando 7a of SS-Einsatzgruppe (mobile killing unit) B forced around 50,000 exhausted and defenceless civilians on a march to this camp.

Left out in the open and with no food or water, between 9,000 and 13,000 children, women and men perished here before the arrival of the 65th Army of the 1st Belarusian Front on 17 March 1944. This planned mass death as a result of typhus, hunger and exposure is regarded as one of the most severe crimes committed by the Wehrmacht against civilians in World War Two. 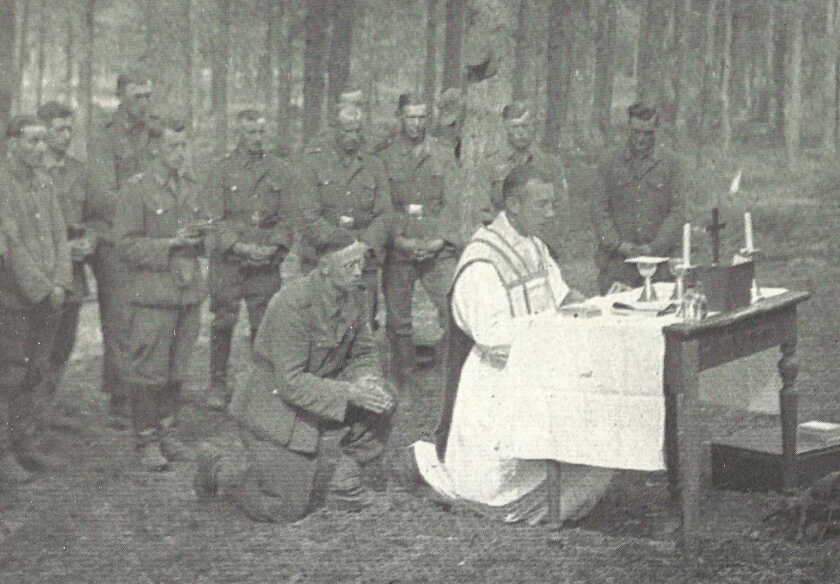 “Women who were no longer able to carry their children left them lying on the road. These children were shot, too, just as anyone at all who could no longer keep going due to illness, age or weakness was ‘bumped off’.”

Josef Perau (1910–2004), army chaplain of the 129th Infantry Division and an eyewitness to the events 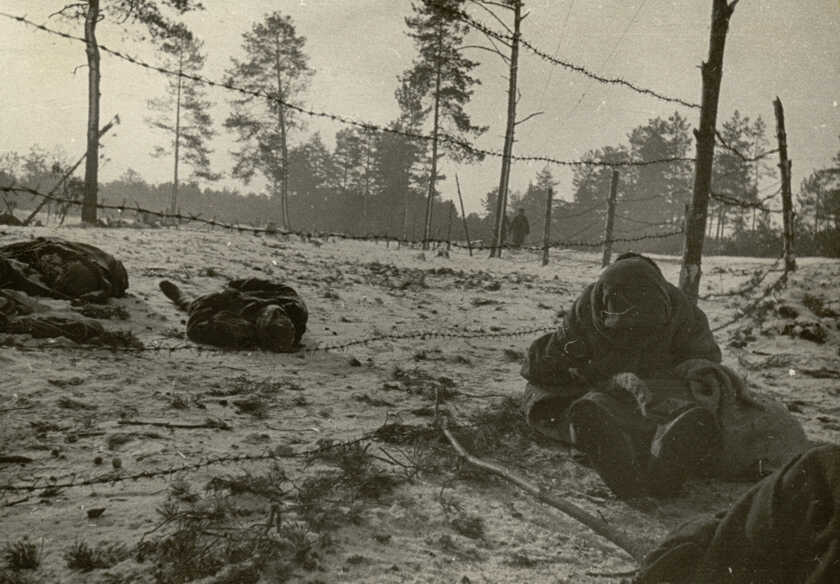 Ozarichi, 18 March 1944: the perimeter of the camp with victims of the mines laid around it. 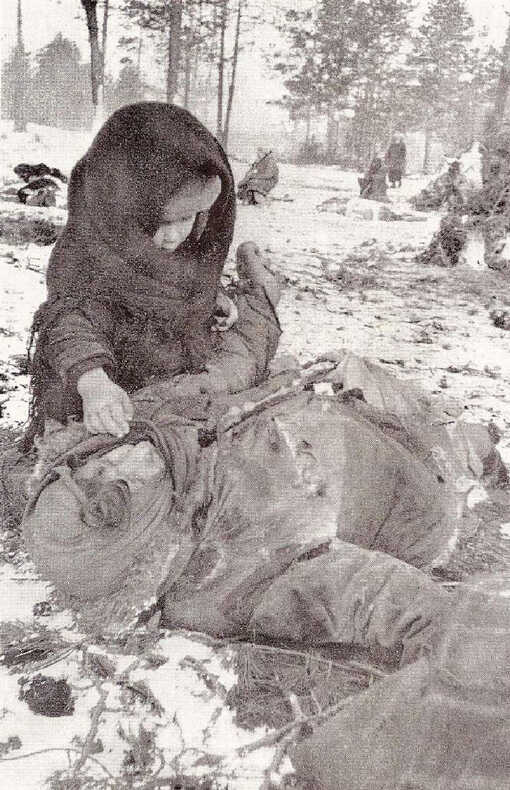 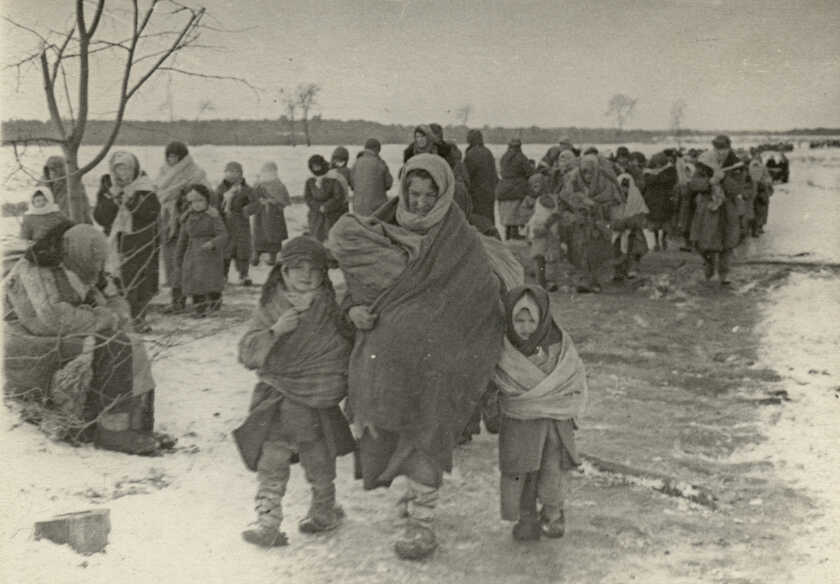 Marija Makarova Rychankova from the village of Virichev with her three children on the way to the settlement at Ozarichi on 19 March 1944. From left to right: Ivan (*1937), Fenya, aged two; and Anya, aged four. Fenja perished on 23 March and Anja on 29 March as a result of conditions in the camp. 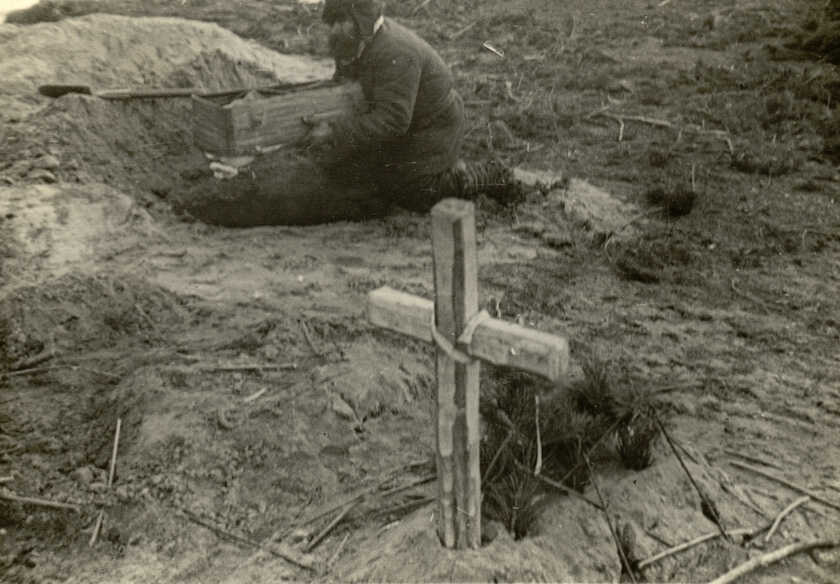 Ozarichi, 19 March 1944: Vassily Gorban from Podviki in the Polesia area buries his only grandchild, Vova, who died of starvation at the age of one-and-a-half.

Directly after the Red Army had reconquered the territory, the Extraordinary Commission began gathering evidence in Ozarichi, Dert and Podosinnik. Its findings were used as a basis for anti-German wartime propaganda and as evidence in the Nuremberg Trials in 1945/46. General Richert was sentenced to death at the Minsk Trial for his involvement in the death camps around Ozarichi and hanged on 30 January 1946 at the city’shippodrome. However, the main perpetrators were never called to account. In 1965 a memorial was erected at the historic site, but the victims were barely acknowledged in the Soviet Union. It was only after the establishment of the independent republic of Belarus that survivors were able to speak publicly about what they had experienced. A new memorial was unveiled in 1994. A small museum and a Russian-Orthodox chapel were added in the years that followed. 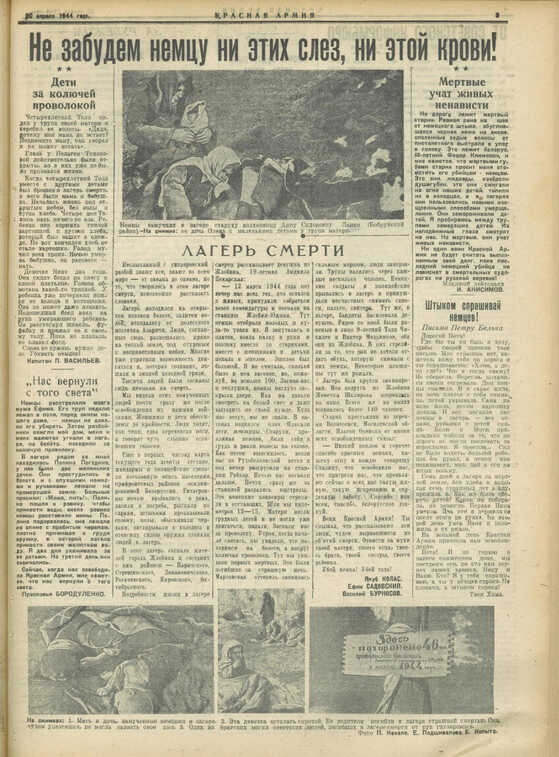 Page 3 of the daily newspaper Red Army, dated 20 April 1944, featuring a report on the “death camp” in Ozarichi. The headline reads: “We won’t forget for the Germans not a single tear, not a single drop of blood!” 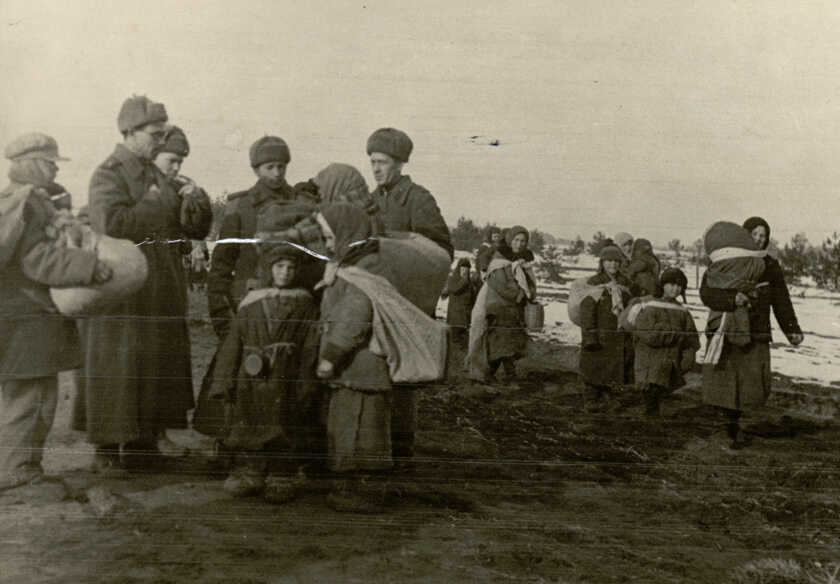 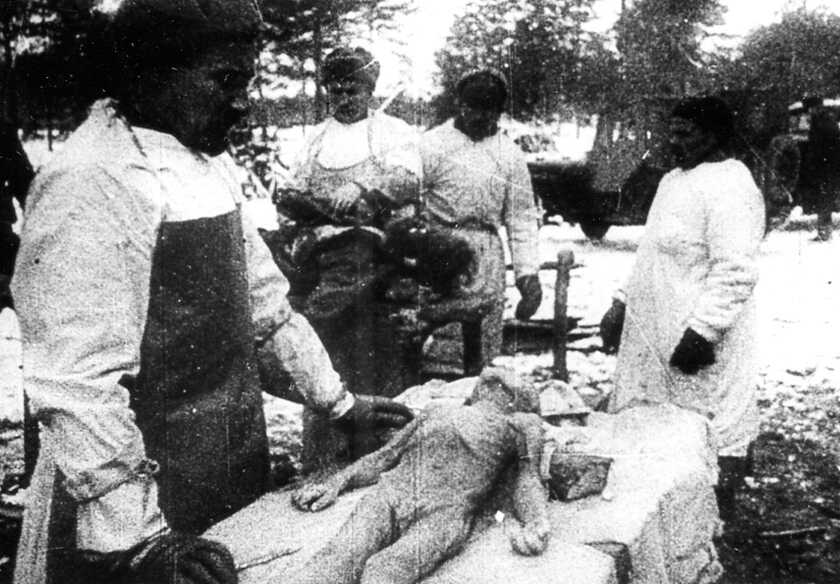 Members of the Extraordinary Commission at work. Still from the film Liberating Soviet Belarus from the German-Fascist Occupiers, which was screened in cinemas.

Valentina Shishlo, at the end of 1940s

Valentina Shishlo was born on 10 February 1936 in the village of Beliza, near Shlobin. Her father was an officer in the Red Army and was captured by the Germans in 1941. During the occupation, Valentina and her family lived with her father’s parents in Beliza. In 1943 they were made to live in a stable with locals as well as civilians who had been expelled from Smolensk.

Valentina was eight when the Wehrmacht forcibly evacuated her, her mother Nina Danilova, and her four siblings to the camp near Ozarichi in March 1944. It took several days to get there and the family had to sleep outside at night. Three of Valentina’s younger brothers, Garik, Marat und Boris, perished in the camp. Valentina and her sister Klara survived thanks to their grandmother Varvara, who made a bed for them out of a sheepskin belonging to one of the dead. Nonetheless, Valentina fell ill with typhus and required treatment in a field hospital after liberation. 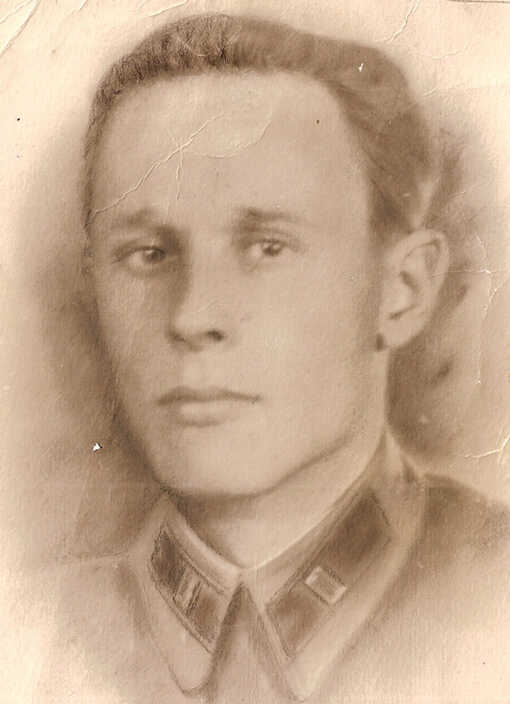 Valentina’s father Fjodor Danilow, 1941. He was taken prisoner and sent to Dachau concentration camp. He was murdered at the SS shooting site in Hebertshausen. 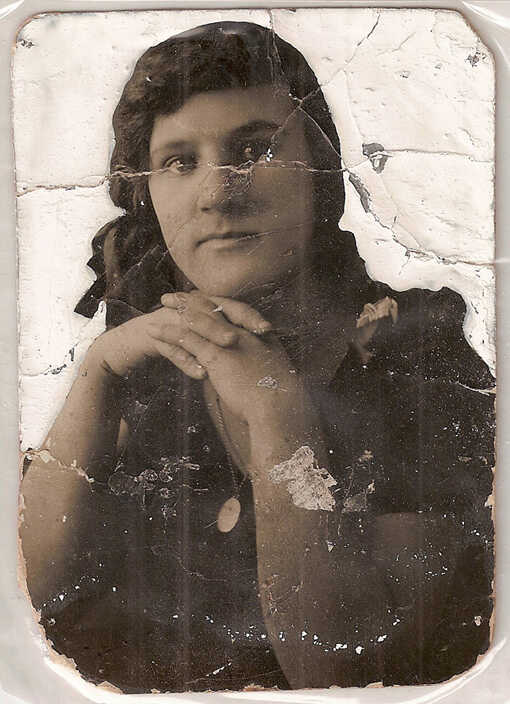 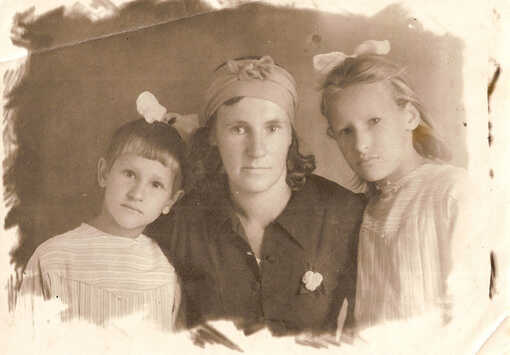 Valentina (left) with her mother Nina and sister Klara in the late 1940s.

“In the morning no one wakes us, the dogs do not bark, there is no sound to be heard. Slowly, everyone raises their heads and anyone who can gets up. There they are, our rescuers. Oh, how many lives it cost, for everyone rushes towards them [the soldiers]. And they shout, ‘Stay there, don’t move a muscle […] they have laid mines throughout the camp’.”

Interview with Valentina Shishlo on 21 December 2018 in Minsk 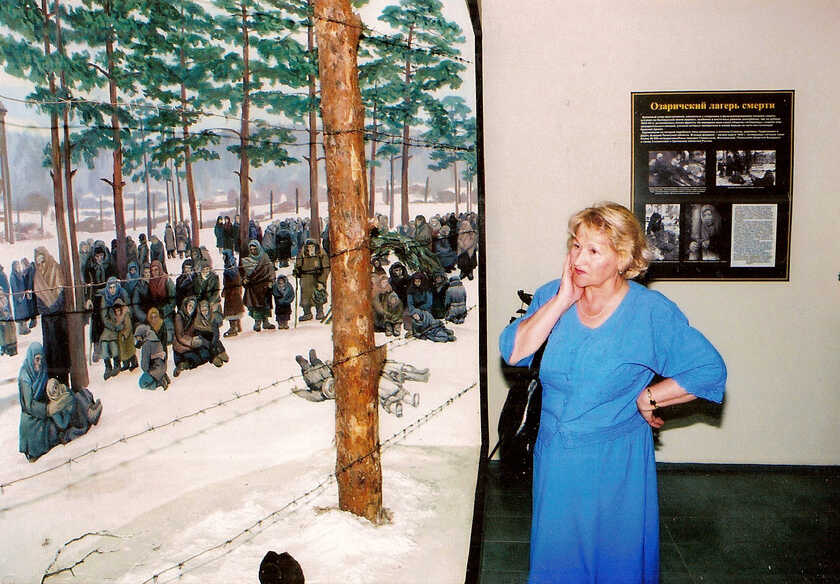 Valentina Shishlo at Ozarichi Museum in the 1990s. For decades, the qualified technician has been recounting what she experienced and witnessed. Since 2010 she has headed the local association of Ozarichi survivors in Minsk. 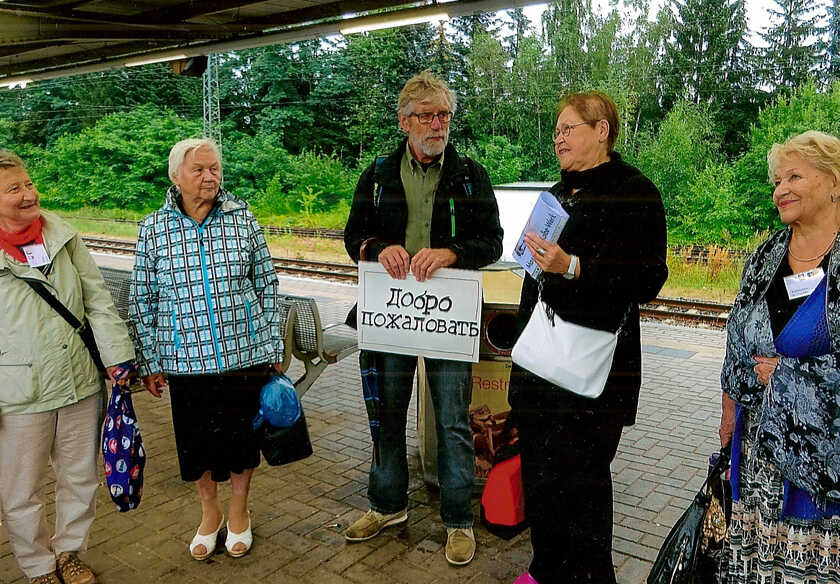 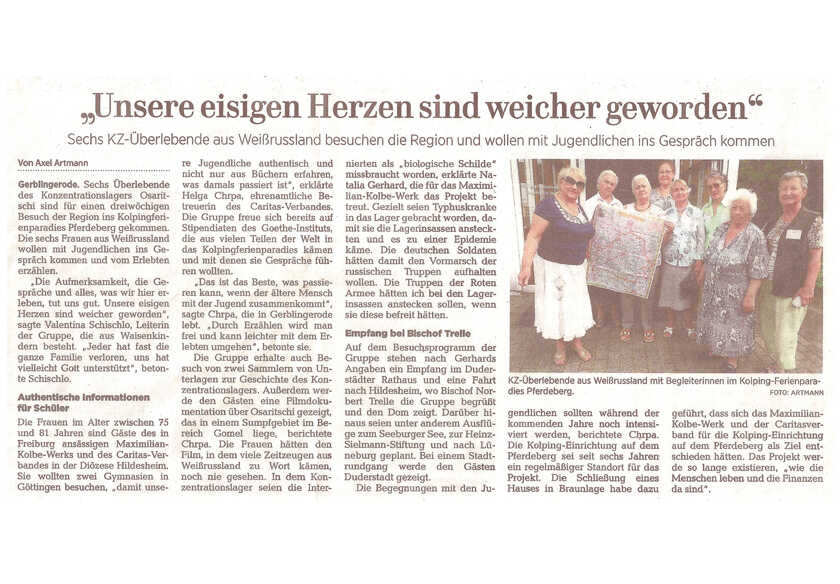 Duderstadt (Lower Saxony), August 2017: Valentina Shishlo and other survivors of the camps around Ozarichi on a visit as guests of the Maximilian Kolbe Works.

Duderstadt (Lower Saxony), August 2017: Valentina Shishlo and other survivors of the camps around Ozarichi on a visit as guests of the Maximilian Kolbe Works.